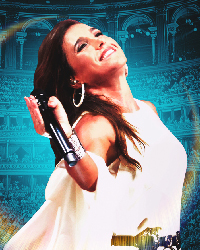 × Soledad "La Sole" Pastorutti is an Argentine folk singer, who brought the genre to the younger generations at the end of the 20th century and the beginning of the 21st. She is also a film and TV actress. Her first album, Poncho al Viento, is Sony Music's best-selling album ever in Argentina according to Sony Music's president while her second album, La Sole, is Sony Music Argentina's second best-selling album ever. She has been awarded the prestigious "Silver Torch" award at the Viña del Mar Festival. In 2014, Soledad released Raíz, a collaborative album featuring Mexican singer Lila Downs and Spanish artist Niña Pastori, and received a nomination for a Grammy Award for Best Latin Pop Album and the Latin Grammy Award for Album of the Year, winning the Latin Grammy for Best Folk Album. Soledad was also featured with her Raiz partners in Santana’s live concert recording, Corazón.

Additional discounts may be available by calling the Box Office. There is a $4 per order fee for all sales not made in person at the Box Office by cash. Discounts are limited to a maximum of 2 tickets. All additional tickets will be at the full public price. All programs, artists, dates, policies, prices and times subject to change. Valid photo ID required for all transactions. Lobby opens 1 hour prior to event. No refunds or exchanges. All sales are final.

Buy To This Event Directions