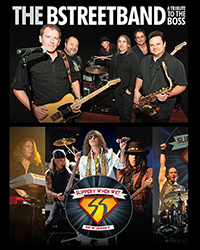 Slippery When Wet (NJ) is a group of seasoned veterans of the New York and New Jersey music scene. Raised on the same mean streets and reared in many of the same bars and nightclubs as Jon and the band, these experienced rockers bring the same energy, enthusiasm, and New Jersey attitude to the stage as the early Bon Jovi, circa 1986! From the heart of the Jersey Shore, the B-Street Band is the hardest working tribute band on the circuit, performing year round throughout the country. Loved by the musicians they honor, B-Street Band has had the honor and privilege of performing with several E-Street Band including Steve Van Zandt, Max Weinberg, the late great Clarence Clemons, Garry W. Tallent, and Vini "Mad Dog" Lopez. "The Boss" himself has made an appearance to see the B-Street Band. These bands pay tribute to two of New Jersey's most popular artists and the sounds of Jersey Rock.